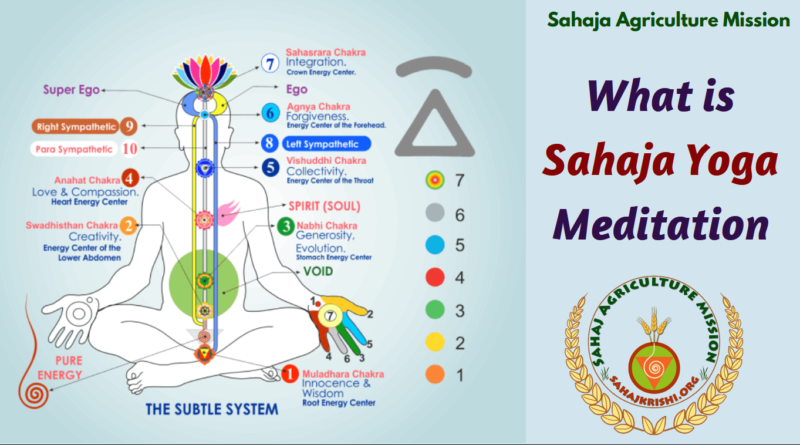 Shri Mataji introduced the concept of Sahaja Yoga in the year 1970 for providing a method of rebirth to the human beings as described in various ancient scriptures and saints like Patanjali, Adi Shankaracharya and Kabirdas. The subtle chakra system in human beings has already been described in Indian ancient spirituality and the same has been incorporated in Sahaja Yoga with broader and enhanced descriptions.

Sahaja Yoga is a spiritual procedure which facilitates to feel all pervading vibrations called Chaitanya of ‘Primordial power’ or Adishakti/Param chaitanya. Shri Mataji described that there is a power behind all functioning in this universe and this primordial power is named as Adishakti. When this all pervading power under the blessings of Shri Mataji gets connected with its own form i.e. kundalini, sitting in dormant condition in the sacrum bone of a human being, this power starts flowing from the human body in the form of vibrations.

Uniqueness of Sahaja Yoga is that kundalini awakening can be felt at the physical level in the form of vibrations passing on palms and on limbic area of head. It may look strange to a person who has not yet experienced it but this experience has been felt by the thousands of Sahaja Yogis spread over the world in about 140 countries .

By applying the meditation and practices of Sahaja Yoga, the awakening of Kundalini is strengthened and stabilized in the form of thoughtless (Nirvichar), then doubtless (Nirvikalp) and then selfless (Nirakar) awareness state of the being. These vibrations have positive effect on living and non-living beings of the world. These effects have been checked and tested on water, plants, human beings and domestic animals. The medical research on effect of Sahaja Yoga Meditation has already been documented by Dr. U.C. Rao in his book “Medical Science enlightened by Sahajayoga” and global clinical studies on effect of Sahaja Yoga meditation on human health have been documented by Dr. Ramesh Manocha of New Zealand.