Mrs. Nirmala Srivastava (née Nirmala Salve) (March 21, 1923-February 23, 2011), also known as “Shrimataji Nirmala Devi” or only Shri Mataji, was born in Chindwara, Madhya Pradesh, India. In her youth, she stayed in the ashram of Mahatma Gandhi. Like her parents, she was involved in the struggle for Indian independence and, as a youth leader, was jailed for participating in the Quit India Movement in 1942.

Shri Mataji married Chandrika Prasad Srivastava, a high-ranking Indian civil servant, who later on served the then Prime Minister late Lal Bahadur Shashtri, as Joint Secretary, and was bestowed upon the prestigious honorary KCMG by the queen Elizabeth II and also honoured with “Padma Vibhushan” by Government of India for his dedicated service to the nation.

Shri Mataji, an incarnation of Adisakhti “Goddess Durga” opened her “Sahasarar” through awakening of Kundalini divine power on 5th May 1970 and established “Sahajayoga” for the mass self-realization of common man, who are truth seeker. She travelled more than 120 countries, gave self-realization to millions of people globally.

Medical research by various institutes globally has proved her techniques of “Sahajayoga Meditation” effective in improvement of health conditions of men or women, who practice her simple techniques of meditation. She established the International Sahaja Yoga Health and Research Centre in Mumbai in 1996. In the year 2003, a charity house for the rehabilitation of destitute women and orphan children was set up in Greater Noida (the NGO, Vishwa Nirmala Prem Ashram).

The Shri P.K. Salve Kala Pratishthan in Nagpur was also set up as an international music school in the same year by Shri Mataji, to promote Indian classical music and fine art. Until 2004, during her travels, Shri Mataji gave numerous public lectures, and interviews to newspapers, television and radio . Shri Mataji has been honoured with 14 international awards and also nominated twice for noble prize for her service to the humanity. 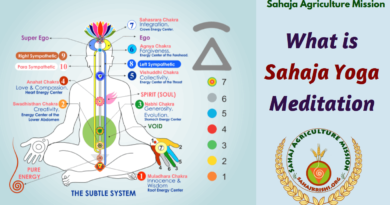 What is Sahaja Yoga Meditation?